FIVE SECRET CARIBBEAN DESTINATIONS! SRI LANKA AND THE MALDIVES: A MATCH MADE IN HEAVEN THE WORLD'S MOST EXCLUSIVE YACHT CHARTER? SAIL THE BRITISH VIRGIN ISLANDS WITH SUNSAIL EXPLORE AUSTRALIA'S BEAUTIFUL WHITSUNDAY ISLANDS - A 10-DAY VOYAGE SOMNIO COMMISSION THE WORLD'S LARGEST SUPERYACHT (222M LOA) WITH 39 EXCLUSIVE RESIDENCES MAUI JIM - POLARIZEDPLUS2® LENS TECHNOLOGY WELLNESS YACHT CHARTER AMAZON RIVER CRUISE: PERU CHARTER 'OPTION B' IN THE EAST MEDITERRANEAN A GULET CHARTER IN TURKEY Top European Yacht Chartering Destinations THE DODECANESE ISLANDS - A ONE WEEK CHARTER TO REMEMBER Mykonos by Catamaran - the Perfect Greek Island Getaway ALPHA YACHTING SPECIAL OFFER - 50% OFF 2021 YACHT CHARTERS & CRUISES IN GREECE ANNAPOLIS & THE CHESAPEAKE BAY: AMERICA'S SAILING CAPITAL 63m UTOPIA IV now for Charter GREECE, TURKEY & CROATIA - YACHT CHARTERS & LUXURY CRUISES CHARTERING A SAILING YACHT IN GREECE - FREQUENTLY ASKED QUESTIONS GET THE MOST OUT OF YACHT OWNERSHIP SUPERYACHT 11.11 - A TRULY SPECTACULAR SUPERYACHT CHARTER CHARTER M/Y PAREAKI IN THE CYCLADES SAIL THE BEAUTIFUL SOUTHWEST COAST OF THE UK 140M+ BRITISH 'NATIONAL FLAGSHIP' TO BE BUILT SPECIAL REPORT: GREECE & TURKEY YACHT CHARTERS top places to visit on a yacht charter from the Solent THE TOP CHARTER DESTINATIONS, BY THE EXPERTS Norway Sailing Adventure to the Fjords and Back YACHT CHARTER CONTRACTS SPECIAL REPORT: UK & IRELAND YACHT CHARTERS & CRUISES EU EXPECTED TO OPEN UP FOR TOURISM THIS SUMMER F1 GRAND PRIX - MIAMI 2022 - YACHT CHARTERS & CRUISES TO BE IN DEMAND THE NORTHWEST PASSAGE - IN THE FOOTSTEPS OF FRANKLIN CHARTER A 'GULET' AND CRUISE THE GREEK ISLANDS THIS SUMMER Vaccinated Britons 'WILL be allowed' to fly on holiday from May 17 Achieve your dream of yacht ownership with Dream Yacht Sales OFF THE BEATEN TRACK IN THE BALEARIC ISLANDS Bahamas Yacht Charters expected to grow 500% in 5 years VENICE TO ATHENS WITH SILVER SHADOW OPV 56 - Combining Military Design With a Luxe Interior SEEK THE SUN ON A SUNSEEKER STAR CLIPPERS TO UNITE IN THE MEDITERRANEAN IN 2022 SAIL THE BRITISH VIRGIN ISLANDS WITH SUNSAIL THIS WINTER EXPLORE THE TURKISH RIVIERA ON 'LUCE DEL MARE' BY-THE-CABIN YACHTING HOLIDAYS IN ST BARTS THE COOLEST BEACH CLUB Cruising the Northwest Passage with Hurtigruten NEW ENGLAND WITH RENAISSANCE DUFOUR 412 Charter the Gulet 'Blue Heaven' this Summer! TURKEY TO REOPEN FOR YACHTING THIS SPRING MIAMI - WHERE CULTURE MEETS THE BEACH CLASSIC BENETTI (35M) FOR SALE FOR €2.6M GREECE TO RE-OPEN FOR YACHT CHARTERS & SAILING HOLIDAYS IN MAY? WINE TASTING ON THE CANAL DU MIDI SUNRAYS FOR SALE OR CHARTER EXPLORE THE FRENCH RIVIERA - FOR A WEEK OR JUST A DAY OYSTER 495 - A new 50 foot bluewater sailing yacht TARGETING THE UK MARKET JOURNEY IN ST-TROPEZ - A 1-DAY CELEBRATION WITH DREAM YACHTING 'GAMECHANGER' READY FOR CHARTERS FOR THOSE WITH THE MOST ADVENTUROUS SPIRIT IRRESISTIBLE! - 32M (105') HARGRAVE FOR SALE & READY FOR THE 2021 SEASON VIEW THE WORLD THROUGH DIFFERENT EYES CORONAVIRUS: LIVE YACHTING UPDATES Yacht Charters in the Era of Social Distancing Silversea Cruises - Information on the commencement of travel LAGOON - FROM IDEA TO REALITY AZIMUT'S MAGELLANO 25 METRI - AT ONE WITH THE SEA FLOTILLA SAILING & KITEBOARDING IN THE BAHAMAS THE YACHT CHARTER SHOW & FORUM ABOARD & ASHORE IN ST. KITTS A 3-Night Adventure Voyage from Dubrovnik WHERE CAN I CHARTER? CROATIA - A 7-DAY SAILING ITINERARY FROM DUBROVNIK SAILING IN THAILAND IS AN EPIC VACATION EXPERIENCE CHARTER A YACHT ON THE FRENCH RIVIERA & CORSICA THINKING ABOUT A SAILING VACATION IN GREECE? DISCOVER UNIQUE DESTINATIONS IN THE CARIBBEAN LATE SUMMER SAILING IN SARDINIA FRENCH POLYNESIA - ONE WEEK BAREBOAT WITH SUNSAIL DISCOVER THE NORFOLK BROADS EXPLORATION NEVER LOOKED SO GOOD OCEANIS 51.1 - AN OCEAN SAILING YACHT FOR CHARTER & SALE EXPLORE MALTA & THE MEDITERRANEAN WITH SUNSEEKER MALTA FROM MARTINIQUE TO MUSTIQUE CRUISE CORSICA & SARDINIA WITH A PRINCESS SAIL & KITEBBOARD IN THE BAHAMAS WITH SUNSAIL CHARTER 'PRIMETIME' IN THE PHILIPPINES NATIONAL PARK EXPLORE THE WORLD WITH THE ROSETTI 171 CRUISING THE STUNNING ADRIATIC - SUNSEEKER STYLE! EMERALD YACHT CRUISES INTRODUCES 50-CABIN 'EMERALD AZZURA' ANTIGUA SAILING WEEK 2020 & DREAM YACHT CHARTER 68M SOARING - NEW TO THE SUPERYACHT CHARTER MARKET EARN YOUR POWER CERTIFICATION CHARTER MANAGEMENT PROGRAMMES TOP THINGS TO DO IN ANTIGUA A WINE TASTING CRUISE IS PERFECT! DISCOVER THE WORLD WITH M/Y CLOUDBREAK ENDEAVOUR 2 IN THE AEOLIAN ISLANDS 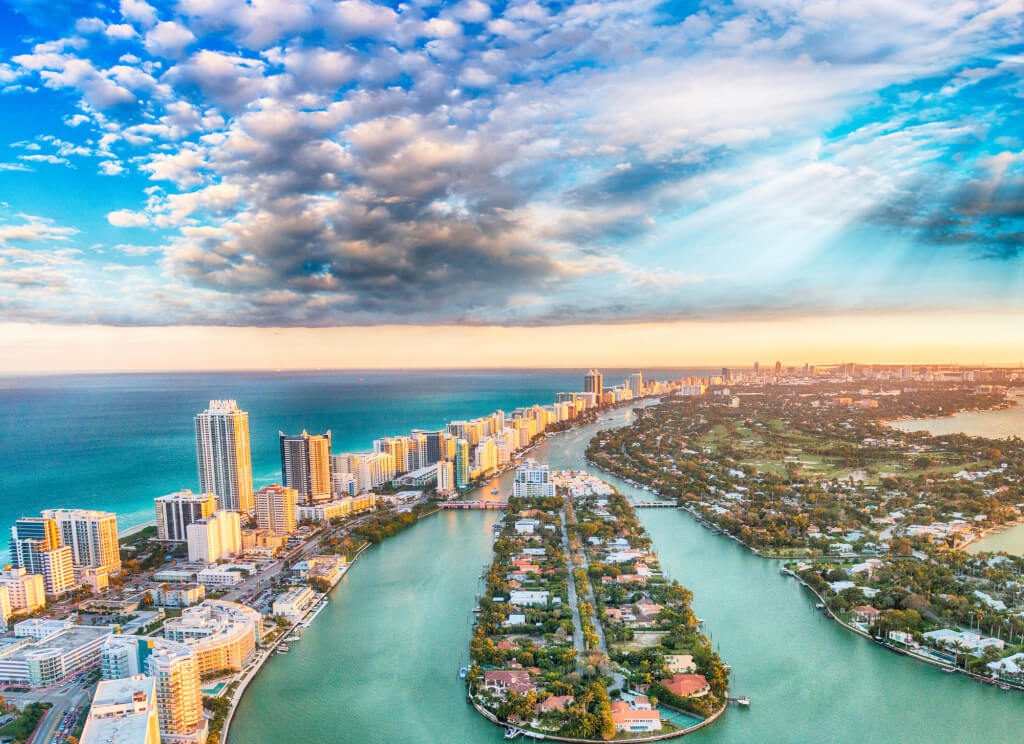 Then on arrival at Key West, among swaying palms and small fishing boats that glittering off the harbour, seek out a cafe con leche and a slice of key lime pie. Then set out for attractions along Duval Street or Mallory Square, both hubs for shopping and nightlife. Don’t miss the six-toed cats living at Ernest Hemingway’s famed Spanish Colonial house-turned-museum. And, of course, a photo op awaits at the Southernmost Point of the United States, a concrete buoy memorializing Key West’s geography.

MIAMI
From the Art Deco-lined shores of Miami Beach to the couture-filled streets of the Design District, Miami is a city that manages to simultaneously pay tribute to its storied past and to remain on the cutting edge of what’s next. A playground for the world’s trendsetters for nearly a century, they don’t call it Magic City for nothing, and T+L’s Miami travel guide has the scoop on just where to dig up that glamour.
Its reputation for warm tropical weather, exquisite beachfront properties, and the atmosphere of sceney South Beach make Miami the winter getaway of choice for thousands of Americans each year. A Miami trip can offer the country’s best snorkeling and scuba diving, with colorful views of marine life and coral reefs, as well as lush tropical vegetation in neighborhoods like Coconut Grove, as well as the prominent Latin American influence on the city’s culture and cuisine.

FORT LAUDERDALE
The 'Venice of the Americas', Fort Lauderdale is famous for its beaches, arts, culture and events. From shopping on Las Olas Boulevard, to gondola rides on the canals, to a historic riverfront.
Just two miles north of Port Everglades, you can experience Fort Lauderdale's landscaped beachfront promenade, with its signature white wave wall and brick paved path. Across the street, visit luxury hotels, and enjoy Fort Lauderdale shopping or dining or a narrated 90-minute amphibious tour of quaint Las Olas Boulevard, historical districts, and the mansions and yachts dotting Millionaires Row.
Stop at the Stranahan House, a preserved 1900s home furnished with antiques of the era. Or "follow the red brick road" of the Fort Lauderdale Riverwalk, the landscaped park, to the Arts and Entertainment District.
Then dive into the Atlantic, hike into the Everglades or enjoy a workout and healthy fare at a resort spa. Fort Lauderdale has it all!

THE FLORIDA KEYS
The Florida Keys is a 150 mile long string of Islands connected to South Florida by 43 bridges of the scenic Overseas Highway; a road that suspends you between sea and sky. A trip to the Florida Keys combines perfectly with a visit to nearby Miami and will bring you to a world away from the theme parks of central Florida.
The turquoise blue waters that surrounds Key Largo, Islamorada, Marathon, Big Pine Key and Key West are home to the only living coral reef in North America, making The Keys a divers paradise.