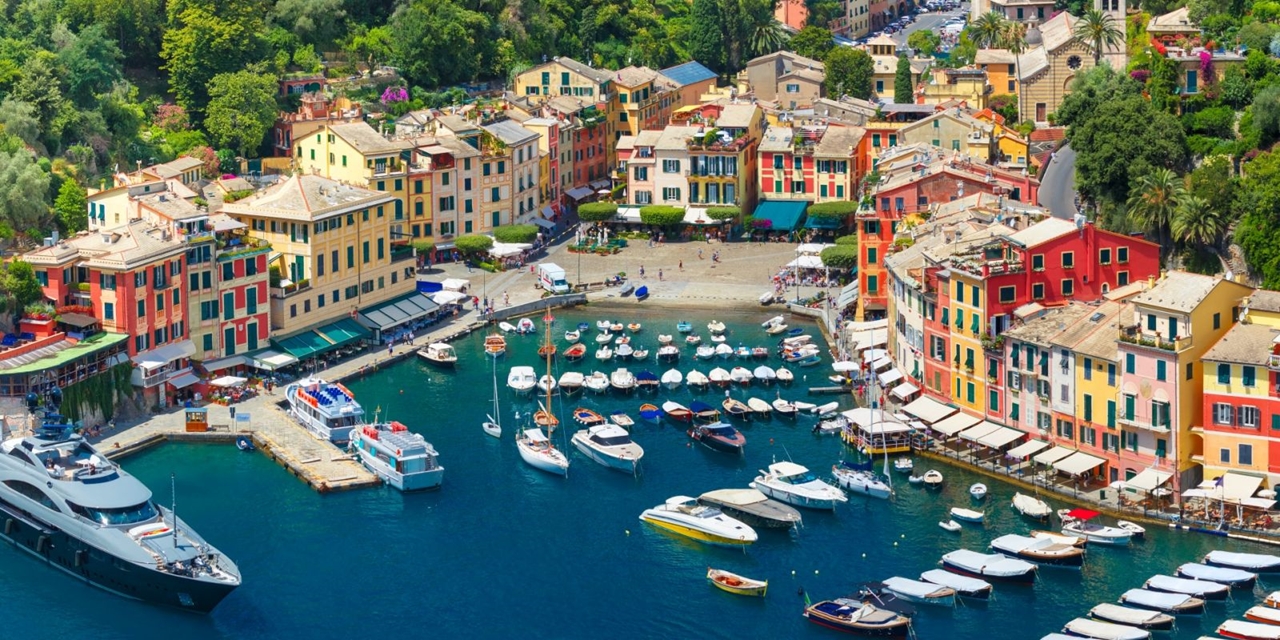 Liguria is one of the smallest regions in Italy. This long, thin region borders the northwest coast of Italy and is known as the Italian Riviera. With a stunningly beautiful coastline, inland the region is mountainous and dotted with small villages. Among the many superb regions and villages to visit on the Italian Rivera coastline are the following:

LE CINQUE TERRE
Le Cinque Terre, the five lands, are a group of five picturesque villages accessed by train or ferry. There are popular hiking trails between the villages and up into the hills. To use the trails you'll need to buy a Cinque Terre Card, which also includes local buses and one of the cards also includes local regional trains. If you want to stay right in one of the villages, be sure to book a Cinque Terre hotel or bed and breakfast in advance as there aren't many places to stay.
The Cinque Terre, along with nearby Portovenere, make up a UNESCO World Heritage Site. Portovenere's harbor is lined with brightly colored houses. Narrow medieval streets lead up the hill to a castle, and a picturesque church sits on the tip of the promontory. The poet Byron used to swim in the sea near the promontory in what's now named Byron's Cove. This area, actually La Spezia Bay, is known as the Gulf of Poets.
Lerici, also on the Gulf of Poets, sits across the bay from Portovenere. From Lerici, you can walk to San Terenzo along the seaside promenade and there are hiking trails to small fishing villages to the southeast like Fiascherino, Tellaro, and Montemarcello. During summer there are ferries to Portovenere and Cinque Terre. Lerici has a castle, a beach, a small old quarter, and lots of seafood restaurants.

PORTOFINO
Portofino, a favorite of the rich and famous during its 1950s heyday, is a beautiful village of pastel-colored houses surrounding a half-moon shaped harbor. Above the village sits the Castello Brown, reached by a walking path through the Botanic Garden. There are good hiking trails around Portofino and a marine protected area.
Santa Margherita Ligure, a larger and more affordable town than Portofino, is often used as a base for visiting Portofino (by bus or ferry), Cinque Terre, Genoa, and other towns in Liguria using public transportation. It's on the coastal train line and during late spring and summer, ferries run from its port.

RAPALLO
Rapallo is another large resort town with a fishing harbor, a beautiful seaside promenade with hotels and cafes, and a medieval castle. A spectacular cable car ride takes you up to the 16th-century sanctuary of Montallegro, from where there are beautiful sea views.

CAMOGLI
Camogli is a charming fishing village on a rocky outcrop. Camogli features pedestrian streets with shops and a small harbor with colorful houses, many with trompe l'oeil treatments, built right up to the fine beach. From Camogli or Portofino you can visit San Fruttuoso, an isolated fishing village reached only by sea or a 2- to a 3-hour hiking trail.
Between Camogli and Genoa, the small seaside town of Genoa Nervi, on the train line, is worth a visit too for its nice promenade along the sea.

CHIAVARI
Situated at the mouth of the River Entella, Chiavari has a nice Botanic Garden, beaches, colorful morning markets held in the square in the town center, and one of the great traditional Italian bars, Caffe Delle Carrozze.

SESTRI LEVANTE
Sestri Levante is another large resort town. It's set on a promontory between two bays and has a nice seaside promenade with extensive views of the Gulf of Rapallo. On the tip of the promontory is the Castelli Gualino, imitations of medieval castles. There is also a walking trail to a signal station on the southern spur of Monte Castello.