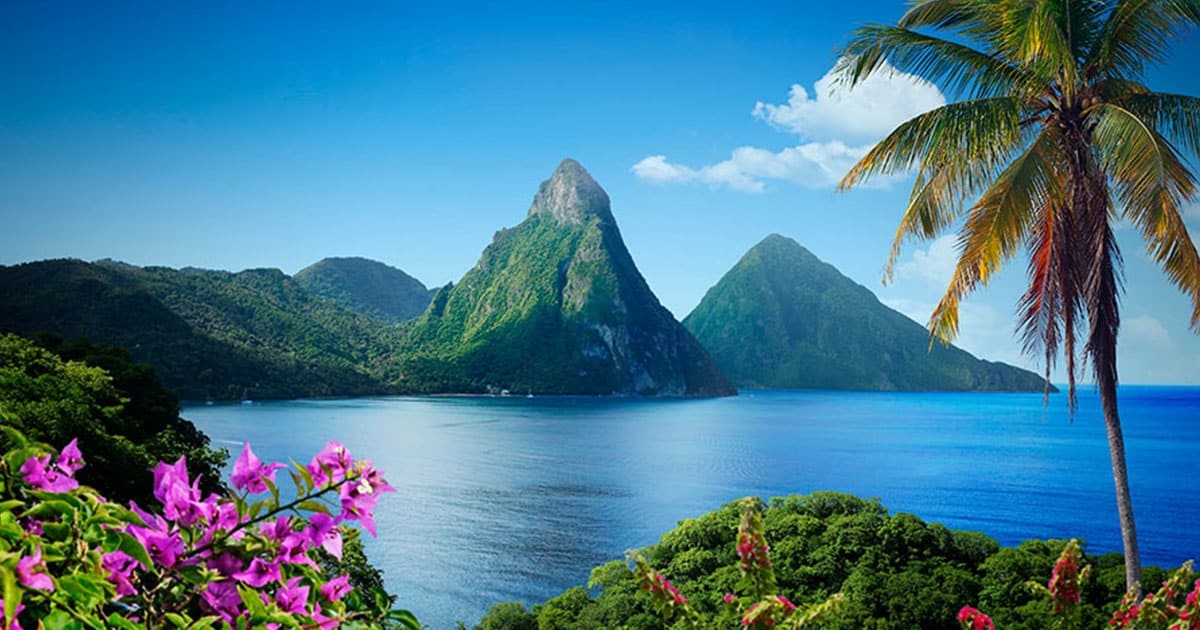 St Lucia, Dominica, Trinidad & Tobago, Saint Vincent and the Grenadines, and the famous island of Mustique, haunt of the rich and famous. The Windward Islands are called such because they were more windward to sailing ships arriving to the New World than the Leeward Islands, given that the prevailing trade winds in the West Indies blow east to west. The trans-Atlantic currents and winds that provided the fastest route across the ocean brought these ships to the rough dividing line between the Windward and Leeward islands.

ST LUCIA
St. Lucia is the sort of island that travellers to the Caribbean dream about--a small, lush tropical gem that is still relatively unknown. One of the Windward Islands of the Lesser Antilles, it is located midway down the Eastern Caribbean chain, between Martinique and St. Vincent, and north of Barbados. St. Lucia is only 27 miles long and 14 miles wide, with a shape that is said to resemble either a mango or an avocado (depending on your taste). The Atlantic Ocean kisses its eastern shore, while the beaches of the west coast owe their beauty to the calm Caribbean Sea. Highly distinctive, its dramatic twin coastal peaks, the Pitons, soar 2,000 feet up from the sea, sheltering magnificent rain forests where wild orchids, giant ferns, and birds of paradise flourish. Brilliantly-plumed tropical birds abound, including endangered species like the indigenous St. Lucia parrot.

ST VINCENT & THE GRENADINES
Scattered across the Caribbean Sea like so many emeralds, St Vincent and the Grenadines is a glorious-looking archipelago. The country's names makes it sound like an old soul band and aptly, there is something timeless about this beautiful place. Lush mountain peaks, white sands, secluded coves, volcanic landscapers and spectacular coral reefs all go towards making this one of the Caribbean's most diverse regions.
Used as a setting for the 'Pirates of the Caribbean' films, the smaller 32 islands that make up the Grenadines offer an even quieter pace of life and are perfect for those who just fancy kicking back in wave-lapped sunshine for a week or two.

MUSTIQUE
The mere name Mustique conjures up pictures of heady goings on under a hot sun, with the caftan-clad rich and famous able to behave as they please away from the lenses of the paparazzi. With Princess Margaret and Mick Jagger frequent visitors own the past, Kate Moss and Claudia Schiffer also holiday here, so does Calvin Klein, David Geffen and tycoon Ed Bronfman. Residents include Swiss bankers, a Chanel heiress, the parmesan king of Italy and a string of multi-millionaires who deal in anything from designer clothes to girlie magazines.
Privately owned and wholly controlled by the Mustique Company, the island has perfect white beaches studded with huge pink shells and fringed by imported palm trees. You won't find cruise ships in the harbour, only occasional yachtsmen drifting by on their way through the turquoise waters of the Grenadines.

TRINIDAD & TOBAGO
Possibly the most exciting and unique destination in the Caribbean, Trinidad and Tobago offers visitors the ultimate vacation experience. Together with Tobago’s well-known fine beaches and coral reefs, the larger sister island of Trinidad is justly famous for its incredible natural diversity and dynamic cultural scene.
Each February, the capital, Port of Spain, explodes into one of the world’s biggest parties, the pre-LentenCarnival, where tens of thousands of costumed masqueraders parade through the streets to lively sound system beats and the time-old Trinidadian percussive instrument, steel-pan. And at any time of the year, Port of Spain offers visitors a vibrant and friendly nightlife where you can really get to know Caribbean culture, far from the glitz of all-inclusive resorts.
Outside the big city, the twin-island republic is notably laid-back, with myriad opportunities for eco-tourism. From rainforest – covered mountains and low-key beach communities, through to Hindu temples and abundant bird and animal life, it is hard not to find your own little piece of paradise in T&T.