FIVE SECRET CARIBBEAN DESTINATIONS! YACHT SHARE NETWORK OFF THE BEATEN TRACK IN THE BALEARIC ISLANDS A GULET CHARTER IN TURKEY SRI LANKA AND THE MALDIVES: A MATCH MADE IN HEAVEN THE WORLD'S MOST EXCLUSIVE YACHT CHARTER? SAIL THE BRITISH VIRGIN ISLANDS WITH SUNSAIL EXPLORE AUSTRALIA'S BEAUTIFUL WHITSUNDAY ISLANDS - A 10-DAY VOYAGE SOMNIO COMMISSION THE WORLD'S LARGEST SUPERYACHT (222M LOA) WITH 39 EXCLUSIVE RESIDENCES MAUI JIM - POLARIZEDPLUS2® LENS TECHNOLOGY WELLNESS YACHT CHARTER AMAZON RIVER CRUISE: PERU CHARTER 'OPTION B' IN THE EAST MEDITERRANEAN THE DODECANESE ISLANDS - A ONE WEEK CHARTER TO REMEMBER Top European Yacht Chartering Destinations Mykonos by Catamaran - the Perfect Greek Island Getaway ALPHA YACHTING SPECIAL OFFER - 50% OFF 2021 YACHT CHARTERS & CRUISES IN GREECE ANNAPOLIS & THE CHESAPEAKE BAY: AMERICA'S SAILING CAPITAL 63m UTOPIA IV now for Charter GREECE, TURKEY & CROATIA - YACHT CHARTERS & LUXURY CRUISES CHARTERING A SAILING YACHT IN GREECE - FREQUENTLY ASKED QUESTIONS GET THE MOST OUT OF YACHT OWNERSHIP SUPERYACHT 11.11 - A TRULY SPECTACULAR SUPERYACHT CHARTER CHARTER M/Y PAREAKI IN THE CYCLADES SAIL THE BEAUTIFUL SOUTHWEST COAST OF THE UK 140M+ BRITISH 'NATIONAL FLAGSHIP' TO BE BUILT SPECIAL REPORT: GREECE & TURKEY YACHT CHARTERS top places to visit on a yacht charter from the Solent THE TOP CHARTER DESTINATIONS, BY THE EXPERTS Norway Sailing Adventure to the Fjords and Back YACHT CHARTER CONTRACTS SPECIAL REPORT: UK & IRELAND YACHT CHARTERS & CRUISES EU EXPECTED TO OPEN UP FOR TOURISM THIS SUMMER F1 GRAND PRIX - MIAMI 2022 - YACHT CHARTERS & CRUISES TO BE IN DEMAND THE NORTHWEST PASSAGE - IN THE FOOTSTEPS OF FRANKLIN CHARTER A 'GULET' AND CRUISE THE GREEK ISLANDS THIS SUMMER Vaccinated Britons 'WILL be allowed' to fly on holiday from May 17 Achieve your dream of yacht ownership with Dream Yacht Sales Bahamas Yacht Charters expected to grow 500% in 5 years VENICE TO ATHENS WITH SILVER SHADOW OPV 56 - Combining Military Design With a Luxe Interior SEEK THE SUN ON A SUNSEEKER STAR CLIPPERS TO UNITE IN THE MEDITERRANEAN IN 2022 SAIL THE BRITISH VIRGIN ISLANDS WITH SUNSAIL THIS WINTER EXPLORE THE TURKISH RIVIERA ON 'LUCE DEL MARE' BY-THE-CABIN YACHTING HOLIDAYS IN ST BARTS THE COOLEST BEACH CLUB Cruising the Northwest Passage with Hurtigruten NEW ENGLAND WITH RENAISSANCE DUFOUR 412 Charter the Gulet 'Blue Heaven' this Summer! TURKEY TO REOPEN FOR YACHTING THIS SPRING MIAMI - WHERE CULTURE MEETS THE BEACH CLASSIC BENETTI (35M) FOR SALE FOR €2.6M GREECE TO RE-OPEN FOR YACHT CHARTERS & SAILING HOLIDAYS IN MAY? WINE TASTING ON THE CANAL DU MIDI SUNRAYS FOR SALE OR CHARTER EXPLORE THE FRENCH RIVIERA - FOR A WEEK OR JUST A DAY OYSTER 495 - A new 50 foot bluewater sailing yacht TARGETING THE UK MARKET JOURNEY IN ST-TROPEZ - A 1-DAY CELEBRATION WITH DREAM YACHTING 'GAMECHANGER' READY FOR CHARTERS FOR THOSE WITH THE MOST ADVENTUROUS SPIRIT IRRESISTIBLE! - 32M (105') HARGRAVE FOR SALE & READY FOR THE 2021 SEASON VIEW THE WORLD THROUGH DIFFERENT EYES CORONAVIRUS: LIVE YACHTING UPDATES Yacht Charters in the Era of Social Distancing Silversea Cruises - Information on the commencement of travel LAGOON - FROM IDEA TO REALITY AZIMUT'S MAGELLANO 25 METRI - AT ONE WITH THE SEA FLOTILLA SAILING & KITEBOARDING IN THE BAHAMAS THE YACHT CHARTER SHOW & FORUM ABOARD & ASHORE IN ST. KITTS A 3-Night Adventure Voyage from Dubrovnik WHERE CAN I CHARTER? CROATIA - A 7-DAY SAILING ITINERARY FROM DUBROVNIK SAILING IN THAILAND IS AN EPIC VACATION EXPERIENCE CHARTER A YACHT ON THE FRENCH RIVIERA & CORSICA THINKING ABOUT A SAILING VACATION IN GREECE? DISCOVER UNIQUE DESTINATIONS IN THE CARIBBEAN LATE SUMMER SAILING IN SARDINIA FRENCH POLYNESIA - ONE WEEK BAREBOAT WITH SUNSAIL DISCOVER THE NORFOLK BROADS EXPLORATION NEVER LOOKED SO GOOD OCEANIS 51.1 - AN OCEAN SAILING YACHT FOR CHARTER & SALE EXPLORE MALTA & THE MEDITERRANEAN WITH SUNSEEKER MALTA FROM MARTINIQUE TO MUSTIQUE CRUISE CORSICA & SARDINIA WITH A PRINCESS SAIL & KITEBBOARD IN THE BAHAMAS WITH SUNSAIL CHARTER 'PRIMETIME' IN THE PHILIPPINES NATIONAL PARK EXPLORE THE WORLD WITH THE ROSETTI 171 CRUISING THE STUNNING ADRIATIC - SUNSEEKER STYLE! EMERALD YACHT CRUISES INTRODUCES 50-CABIN 'EMERALD AZZURA' ANTIGUA SAILING WEEK 2020 & DREAM YACHT CHARTER 68M SOARING - NEW TO THE SUPERYACHT CHARTER MARKET EARN YOUR POWER CERTIFICATION CHARTER MANAGEMENT PROGRAMMES TOP THINGS TO DO IN ANTIGUA A WINE TASTING CRUISE IS PERFECT! DISCOVER THE WORLD WITH M/Y CLOUDBREAK ENDEAVOUR 2 IN THE AEOLIAN ISLANDS 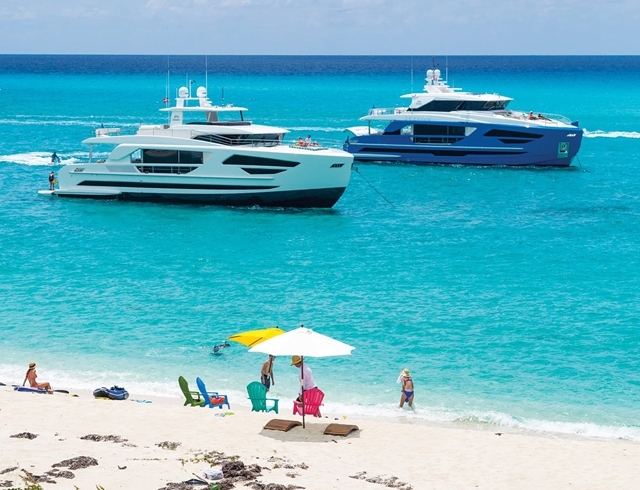 30 December 2021
YACHT SHARE NETWORK,
Motor Yacht
All
Yacht Share Network is among an increasing number of companies offering syndicate ownership, rather than outright ownership of a luxury yacht.

Ease of entry and exit are a key differentiator between shared and outright ownership of a yacht. Yacht Share Network are very keen to maintain the comparative ease to buy or sell a share in one of the syndicates. We have found that our shares generally change hands more rapidly, and with less complication than the sale of a whole yacht does.

This is because: A share in a yacht is a much smaller transaction – A £100k outlay on a 5 year old 60ft yacht is much less daunting than a £1m outlay on the same vessel. Buyers can draw comfort from their fellow shareholders in that yacht, who remain happy owners.

A share in a yacht is much less available on the market – There may be 10 or 20 sister ships of any particular model for sale in the western med at any one time, making it hard to sell one’s outright yacht in such a competitive marketplace. Whereas there is probably only ever one share for sale in one of those yachts, meaning the exclusivity generally translates to a quicker sale. (Some of our yachts even have waiting lists of potential new owners)

A share in a yacht is a less risky transaction. – When buying a yacht outright one always wonders what’s wrong with it and why the seller truly wants out? With a share one can fairly safely assume that it’s not the yacht that is the issue, as the majority of other syndicate owners happily staying in the yacht and are not selling her.

A share in a yacht is a less complicated transaction. – When buying a yacht outright one needs to undertake a full survey, make sure there are no liens and that the taxes paid and service history are all as they should be. With a share, the other owners have already vetted all the purchase pitfalls, and the syndicate agreement is the only document of significance. As that is also identical to the agreement of existing owners, it too will have already been scrutinised by the many past and present shareholding owners.
Go to Author's Article