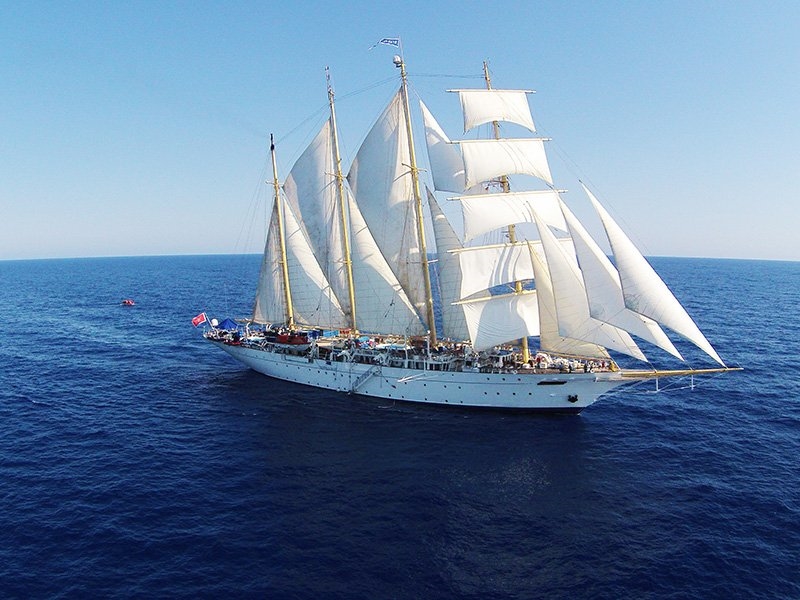 16 November 2022
STAR CLIPPERS,
Cruise Ship
Other
FIND OUT MORE
For the first time since 2014, Star Clippers returns to Costa Rica offering brand new itineraries in Costa Rica and Nicaragua as well as Panama and its famed canal.

Costa Rica is one of the most biodiverse countries in the world. It boasts nearly half a million species inhabiting its lush tropical forests.
This exceptional natural environment offers the visitors many opportunities for unique exploration, including kayaking through the fascinating mangrove forests, getting a bird eye’s view on a canopy forest tour, or simply enjoying unspoiled beaches where to bask in the sun.

SATURDAY, 11 MARCH 2023 PUNTARENAS, COSTA RICA
Puntarenas is a cruise port that is also a gateway to Costa Rica's Pacific Coast. Visit the Paseo de los Turistas promenade near the beach with its many bars and restaurants.

SUNDAY, 12 MARCH 2023 QUEPOS, COSTA RICA
The small busy town of Quepos serves as the gateway to the Manuel Antonio National Park. Although the rapid rise in ecotourism has meant that Quepos has been descended upon it, has largely retained it's authentic feel.There is a good restaurant scene, the streets are easy to navigate and the locals are friendly.

MONDAY, 13 MARCH 2023 GOLFITO, COSTA RICA
Golfito is Costa Rica's most southern port town. It was built on bananas – the United Fruit Company moved its regional headquarters here in the '30s and remained until it's departure in the 1980s.Today it acts as a gateway to visitors who wish to surf at Pavones or take part in sport-fishing. There are plenty of other activities on offer including horseback riding, kayaking and trips to nearby mangrove forests.

TUESDAY, 14 MARCH 2023 COIBA ISLAND, PANAMA
Coiba Island lies 30 miles off of the south coast of Panama.It is the largest of the 38 islands that make up the Coiba National Park, a UNESCO World Heritage Site. It has 1,450 plant species and it's rain forests are home to hundreds of different animals. The surrounding waters support the eastern Pacific's second largest coral reef, which makes scuba diving particularly rewarding. You can spot whale and tiger sharks, manta and eagle rays and large schools of fish. The island also has a fascinating history as it was once a penal colony and was largely isolated for the past century.

Each Star Clippers ship offers a traditional and elegant way to see the world. Feel the wind fill the sails and gently carry you from one gorgeous destination to the next. During your time on board, you can choose to relax on a sun lounger or cool off in one of the pools on the top deck, while more adventurous passengers may enjoy the opportunity to climb the rigging or even have a go at steering the ship. Alternatively, you can wander the interior areas of the ship and discover relaxing lounges, a revitalising spa (Royal Clipper only) and a peaceful library.

Isla Tortuga is widely regarded as the most beautiful island in Costa Rica. With giant coconut palms framing powder soft white sand beaches that are lapped by crystal clear turquoise waters, this really is a tropical paradise. You can also play beach volleyball, rent a kayak, swim, or even get a ride of a glass-bottom boat. However if you are feeling adventurous you can ride the zip line as part of a canopy tour.

Puntarenas is a cruise port that is also a gateway to Costa Rica's Pacific Coast. Visit the Paseo de los Turistas promenade near the beach with its many bars and restaurants.