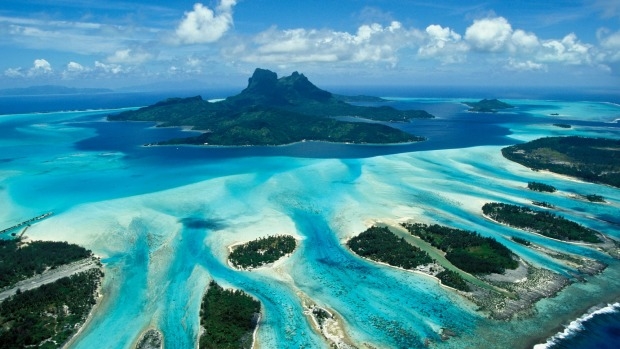 Explore untouched visions of paradise on a French Polynesia bareboat charter holiday. Nestled in the heart of the Pacific Ocean, French Polynesia’s exotic islands offer a majestic destination of unrivalled tropical beauty. Balmy trade winds carry you between exquisite coral reefs, shimmering lagoons and deserted white sand atolls, while spells of open-water sailing take you to lush Polynesian islands. From the vanilla-scented shores of Taha’a to romantic Bora Bora, this far-flung sailing paradise is destined to put you under its enchanting spell.

DAY 1: Apooiti Marina to Motu Taoru, Raiatea
Today you’ll launch from our base at Apooiti Marina, skirting the scenic coast of Raiatea for Motu Taoru. Enclosed within a barrier reef and backed by lush, looming mountains, Raiatea is known as the ‘sacred isle’ as it used to be the religious centre of Polynesia. Sail past ancient temples and glimpse petroglyphs carved in basaltic stones along the coast. The rich lagoon of Motu Taoru is filled with iridescent tropical fish, so don your flippers and enjoy excellent snorkelling and diving.

DAY 2: Motu Taoru to Ha’amene Bay
Cruise the short distance between Raiatea and its little sister island, Taha’a. Navigate carefully between the coral reef and Taha’a into Ha’amene Bay, where you can take a mooring or anchor for the night. Visit one of the black pearl farms or hike into the mountains to enjoy breathtaking views across the South Pacific.

DAY 3: Ha’amene Bay to Motu Tautau
Sail away from long, finger-like Ha’amene Bay, skirting the pristine beaches and isolated bays along the southern coast of Taha’a towards Motu Tautau. Tucked inside the secluded Taha’a lagoon, Motu Tautau faces the lush island of Taha’a on one side and lovely Bora Bora on the other.

DAY 4: Motu Tautau to Motu To’opua
Wind past the beautiful coral that surrounds Taha’a, then edge out into the open waters of the South Pacific. You’ll enjoy blue water sailing today, heading northwest toward Motu To’opua, a tiny islet floating majestically between Bora Bora’s mainland coast and the dramatic coral reef. Drop anchor and face west to enjoy watching the sun sink over the horizon in an unforgettable display of colour.

DAY 5: Motu To’opua to Bora Bora
The dreamy island of Bora Bora is just a quick hop from Motu To’opua. Strewn with lush tropical slopes and perfect white sand beaches and encircled by a necklace-like coral reef, famous Bora Bora is your perfect get-away-from-it-all daydream come true. Tiny islets with tropical beaches lapped by turquoise waters are scattered along the reef, while ancient Polynesian temples are hidden in the lush jungles. Dive the magnificent reef or arrange a shark feeding dive to see lemon, reef or hammerhead sharks in action.

DAY 6: Bora Bora to Apu Bay
Leave Bora Bora’s lush shores and return to the vanilla-scented isle of Taha’a. Head for Apu Bay, one of the beautiful bays along Taha’a’s flower petal-shaped southern coast. Visit the nearby black pearl farm and learn how these beautiful stones are grown inside oyster shells.

DAY 7: Apu Bay to Apooiti Marina
Use the final day of your Tahiti bareboat holiday to make the glorious journey from Apu Bay to Apooiti Marina. Sail north, minding the coral dotted between Taha’a and Raiatea before mooring at our Raiatea base. Set off early and enjoy more time on beautiful Raiatea, or take it easy and explore the lovely corals and reefs along the way.
Go to Author's Article