“SUMMER OF MANTAS” AND “WINTER OF WONDERS” WITH FOUR SEASONS EXPLORER A KRAKEN GUIDE TO CRUISING THE BVI RENTING 'KEYMA' IN GREECE WITH SAMBOAT The Galapagos Islands’ first true superyacht experience FLORIDA & THE KEYS - A 5-DAY GETAWAY! OCEANIS 51.1 - THE FIRST OF A NEW GENERATION YACHT RACING AT COWES WEEK 2023! ALL-INCLUSIVE CREWED MINI CRUISE TO ST. VINCENT & THE GRENADINES Camara C - For a unique Charter in SE Asia Borrow A Boat expands in the USA Hvar – the ideal boating destination for over 2400 years AN EASTERN CARIBBEAN CRUISE ON THE AZAMARA QUEST SUPERYACHT CHARTER 'KING BABY' IN THE BAHAMAS From Rhodes to Rhodes via Turkey FIVE SECRET CARIBBEAN DESTINATIONS! SUPERYACHT 11.11 - A TRULY SPECTACULAR SUPERYACHT CHARTER EXPLORATION OF SOUTH AMERICA AND THE ANTARCTIC LAGOON SEVENTY 7 - THE PINNACLE OF SAILING CATAMARANS A CREWED YACHT CHARTER IN GREECE A 7-DAY WHITSUNDAY ESCAPE CRUISE CORSICA & SARDINIA WITH A PRINCESS Cruising Routes In THE Philippine Islands THE BAHAMAS - TAX 10% VAT ON CHARTERS THE ISLES OF THE BVI - AROUND THE ARCHIPELAGO THAILAND'S SURIN & SIMILAN ISLANDS BALI 4.3 MY Sailing St. Lucia & The Grenadines WORLD CUP 2022 YACHT CHARTERS Croatia - An Elite Destination for Yacht Charters YACHT CHARTER & CRUISE MAGAZINE AROUND THE WORLD IN 80 DAYS SUPERYACHT CHARTER - CARIBBEAN 2023 Mykonos by Catamaran - the Perfect Greek Island Getaway SAIL THE BRITISH VIRGIN ISLANDS WITH SUNSAIL SRI LANKA AND THE MALDIVES: A MATCH MADE IN HEAVEN MAUI JIM - POLARIZEDPLUS2® LENS TECHNOLOGY A GULET CHARTER IN TURKEY EXPLORE AUSTRALIA'S BEAUTIFUL WHITSUNDAY ISLANDS - A 10-DAY VOYAGE GREECE PASSES NEW LAW TO BOOST TOURISM AND INVESTMENT AMAZON RIVER CRUISE: PERU YACHT SHARE NETWORK BORROW-A-BOAT ACQUIRES BARQO SAIL THE BEAUTIFUL SOUTHWEST COAST OF THE UK OFF THE BEATEN TRACK IN THE BALEARIC ISLANDS THE WORLD'S MOST EXCLUSIVE YACHT CHARTER? SOMNIO COMMISSION THE WORLD'S LARGEST SUPERYACHT (222M LOA) WITH 39 EXCLUSIVE RESIDENCES WELLNESS YACHT CHARTER CHARTER 'OPTION B' IN THE EAST MEDITERRANEAN THE DODECANESE ISLANDS - A ONE WEEK CHARTER TO REMEMBER Top European Yacht Chartering Destinations ALPHA YACHTING SPECIAL OFFER - 50% OFF 2021 YACHT CHARTERS & CRUISES IN GREECE ANNAPOLIS & THE CHESAPEAKE BAY: AMERICA'S SAILING CAPITAL 63m UTOPIA IV now for Charter GREECE, TURKEY & CROATIA - YACHT CHARTERS & LUXURY CRUISES CHARTERING A SAILING YACHT IN GREECE - FREQUENTLY ASKED QUESTIONS GET THE MOST OUT OF YACHT OWNERSHIP CHARTER M/Y PAREAKI IN THE CYCLADES 140M+ BRITISH 'NATIONAL FLAGSHIP' TO BE BUILT SPECIAL REPORT: GREECE & TURKEY YACHT CHARTERS top places to visit on a yacht charter from the Solent THE TOP CHARTER DESTINATIONS, BY THE EXPERTS Norway Sailing Adventure to the Fjords and Back YACHT CHARTER CONTRACTS SPECIAL REPORT: UK & IRELAND YACHT CHARTERS & CRUISES EU EXPECTED TO OPEN UP FOR TOURISM THIS SUMMER F1 GRAND PRIX - MIAMI 2022 - YACHT CHARTERS & CRUISES TO BE IN DEMAND THE NORTHWEST PASSAGE - IN THE FOOTSTEPS OF FRANKLIN CHARTER A 'GULET' AND CRUISE THE GREEK ISLANDS THIS SUMMER Vaccinated Britons 'WILL be allowed' to fly on holiday from May 17 Achieve your dream of yacht ownership with Dream Yacht Sales Bahamas Yacht Charters expected to grow 500% in 5 years VENICE TO ATHENS WITH SILVER SHADOW OPV 56 - Combining Military Design With a Luxe Interior SEEK THE SUN ON A SUNSEEKER STAR CLIPPERS TO UNITE IN THE MEDITERRANEAN IN 2022 SAIL THE BRITISH VIRGIN ISLANDS WITH SUNSAIL THIS WINTER EXPLORE THE TURKISH RIVIERA ON 'LUCE DEL MARE' BY-THE-CABIN YACHTING HOLIDAYS IN ST BARTS THE COOLEST BEACH CLUB Cruising the Northwest Passage with Hurtigruten NEW ENGLAND WITH RENAISSANCE DUFOUR 412 Charter the Gulet 'Blue Heaven' this Summer! TURKEY TO REOPEN FOR YACHTING THIS SPRING MIAMI - WHERE CULTURE MEETS THE BEACH CLASSIC BENETTI (35M) FOR SALE FOR €2.6M GREECE TO RE-OPEN FOR YACHT CHARTERS & SAILING HOLIDAYS IN MAY? WINE TASTING ON THE CANAL DU MIDI SUNRAYS FOR SALE OR CHARTER EXPLORE THE FRENCH RIVIERA - FOR A WEEK OR JUST A DAY OYSTER 495 - A new 50 foot bluewater sailing yacht TARGETING THE UK MARKET JOURNEY IN ST-TROPEZ - A 1-DAY CELEBRATION WITH DREAM YACHTING 'GAMECHANGER' READY FOR CHARTERS FOR THOSE WITH THE MOST ADVENTUROUS SPIRIT IRRESISTIBLE! - 32M (105') HARGRAVE FOR SALE & READY FOR THE 2021 SEASON VIEW THE WORLD THROUGH DIFFERENT EYES CORONAVIRUS: LIVE YACHTING UPDATES Yacht Charters in the Era of Social Distancing Silversea Cruises - Information on the commencement of travel LAGOON - FROM IDEA TO REALITY AZIMUT'S MAGELLANO 25 METRI - AT ONE WITH THE SEA FLOTILLA SAILING & KITEBOARDING IN THE BAHAMAS THE YACHT CHARTER SHOW & FORUM ABOARD & ASHORE IN ST. KITTS A 3-Night Adventure Voyage from Dubrovnik WHERE CAN I CHARTER? CROATIA - A 7-DAY SAILING ITINERARY FROM DUBROVNIK SAILING IN THAILAND IS AN EPIC VACATION EXPERIENCE CHARTER A YACHT ON THE FRENCH RIVIERA & CORSICA THINKING ABOUT A SAILING VACATION IN GREECE? DISCOVER UNIQUE DESTINATIONS IN THE CARIBBEAN LATE SUMMER SAILING IN SARDINIA FRENCH POLYNESIA - ONE WEEK BAREBOAT WITH SUNSAIL DISCOVER THE NORFOLK BROADS EXPLORATION NEVER LOOKED SO GOOD EXPLORE MALTA & THE MEDITERRANEAN WITH SUNSEEKER MALTA FROM MARTINIQUE TO MUSTIQUE SAIL & KITEBBOARD IN THE BAHAMAS WITH SUNSAIL CHARTER 'PRIMETIME' IN THE PHILIPPINES NATIONAL PARK EXPLORE THE WORLD WITH THE ROSETTI 171 CRUISING THE STUNNING ADRIATIC - SUNSEEKER STYLE! EMERALD YACHT CRUISES INTRODUCES 50-CABIN 'EMERALD AZZURA' ANTIGUA SAILING WEEK 2020 & DREAM YACHT CHARTER 68M SOARING - NEW TO THE SUPERYACHT CHARTER MARKET EARN YOUR POWER CERTIFICATION CHARTER MANAGEMENT PROGRAMMES TOP THINGS TO DO IN ANTIGUA A WINE TASTING CRUISE IS PERFECT! DISCOVER THE WORLD WITH M/Y CLOUDBREAK ENDEAVOUR 2 IN THE AEOLIAN ISLANDS 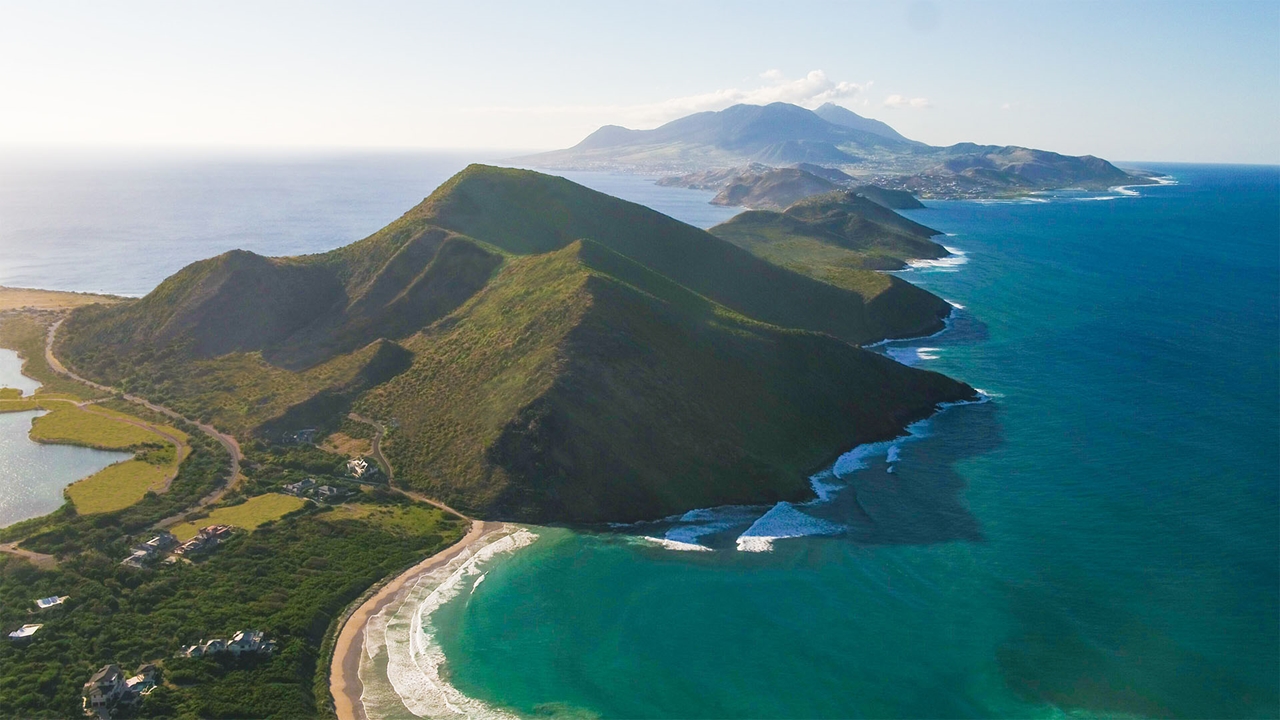 ABOARD & ASHORE IN ST. KITTS

24 December 2020
NORTHROP & JOHNSON,
Caribbean
A spec among the wider sprinkle of Leeward Islands in the Caribbean, St. Kitts is perfectly positioned for a relaxing few days ashore during a cruise through this archipelago chain.

Whether spending a few nights aboard or staying ashore, St. Kitts offers the quintessential Caribbean experience. This is not the place to go for all-inclusive chain resorts, thanks in part to having only recently switched its primary economic focus from exporting sugar to tourism. Instead the island boasts a wide range of properties, some of which are in the form of beachfront villas and condos, hotels and charming inns. For those looking for a full-service five star stay, the Caribbean’s first and only Park Hyatt hotel is located on the beach at Banana Bay, Christophe Harbour, next to Cockleshell Beach, while the Marriott, the Royal St. Kitts, Timothy Beach and recently opened Koi Resort, a Curio Collection by Hilton Hotel, are just a handful of properties located in or close to the bustling area of Frigate Bay.

For those planning to stay aboard their yacht, St. Kitts offers several marinas and safe anchorages for the waterborne. Built to cater to the specific needs of the yachting crowd, Christophe Harbour has all the facilities you need in abundance. Located on the southeast peninsula of the island, the recently built deep-water marina accommodates yachts up to 250 feet, and offers duty-free fuel, easy customs and immigration procedures, and a marina village designed with yacht guests in mind.

Port Zante, which is conveniently located in the center of capital city, Basseterre, also offers marina facilities, customs and immigration services, and provisioning. It is also where you will catch the St. Kitts and Nevis Masquerades performing rhythmic dances in colorful and intricate costumes. For those looking to anchor rather than berth, the island is surrounded by naturally protected coves. If you want to join your yacht in St. Kitts, you can take advantage of the KayanJet private jet terminal with exclusive lounge facilities .

St. Kitts – originally St. Christopher – was named in 1493 by Christopher Columbus. Colonised by the British, it was the jumping-off point for their domination of the other islands in the region and became known as the “Mother Colony.” As such, the island has both a turbulent history and an abundance of historical sites marking this – remnants of those colonial days when the French and British traded St. Kitts back and forth, fighting over sugar – a commodity so precious that during the 17th and 18th centuries it was worth its weight in gold. Indeed, sugar remained the dominant industry on the island until 2005. Today the ghosts of sugar are everywhere, and there is still plenty of green cane swaying in the breeze on the island’s slopes, and more than 250 heritage sites to explore.

Ride an authentic scenic passenger train along the narrow-gauge wagon tracks, originally built to carry sugar cane from the plantations to the capital Basseterre, winding past some of the private sugar plantations and their estate houses. Fairview is the only remaining French plantation house that has been painstakingly restored to its former glory, and the Great House and botanical gardens are open for visitors. To capture the diverse history of the island, head to The National Museum which is located in what used to be the Old Treasury Building dating back to the late 19th century.

The island is also home to the UNESCO World Heritage Site of Brimstone Hill Fortress and National Park. Dating back to the late 1600s, its now silent cannons are a reminder of the region’s position in history. In fact, more than a quarter of St. Kitts is a designated national park, including the American Oceanic Rainforest, one of the rarest ecosystems in the world and fortunately one that is expanding as opposed to the usual news of decreasing rainforests. Stroll along the network of trails that wind through the lush landscape or take a challenging hike up the extinct volcano and around the wide summit crater of Mount Liamuiga. The highest point on the island, and in fact one of the highest peaks in the eastern Caribbean archipelago, the views are spectacular.

For the more active guests on board, the south-west coast also offers plenty of sheltered anchorages with private bays for your favorite water sports above the surface or below the waterline. From snorkeling in the shallows to kayaking, speedboats and flyboarding, there is something here for everyone. The government is currently working to create marine protected areas to protect the island’s coral reefs and marine life. And of course, there are the beautiful beaches with sand that’s a fascinating blend of volcanic black sand and white coral particles, the best of which include Turtle Beach, Banana Beach, and Half Moon Bay.
Go to Author's Article